The first portion of this page is with the type written version of Angela Houston’s letter. It was submitted into court. It is clear my mother, Angela Houston, was of sound mind. She wrote this letter on her own without my knowledge.

To Whom It May Concern:

I, Angela Mary Comber Houston, will be 90 years old on August 8, 2010. I wish to express my thoughts and feelings should I become incapacitated or deceased.

My late husband Dr. George Frederick Houston, commonly known as “Bob”) and I had a wonderful marriage for over 34 years. For the duration of our marriage he was a gentleman in every sense of the word; he never said an unkind word to me.

My late husband would be shocked and deeply hurt if he knew how his four children have attempted to deny their father the right to take care of his wife by having his Will honored. He would not understand his children’s betrayal and attempt to deny me my spousal rights, plus their attempt to destroy my relationship with my daughter Louise Fowler.

During these 34 years I had a good relationship with my step children and never imagined that many years later the allegations made by my eldest stepson, Dr. James Houston, in the form of affidavits, supported by his 3 siblings would knock me to my knees with shock and dismay.

For a number of years my daughter and I were estranged from each other. This unfortunate break up came to an end when she (Louise Fowler) initiated a reconciliation in approximately 2005 by writing to me, then phoning me. In or around September 2007 she flew from Vancouver to Victoria where we proceeded to , one step at a time, put the pieces together again. It is my great joy we have forgiven each other and left the past behind. My late husband supported and encouraged the reconciliation in the only way he could, with open arms and a loving heart.

At no time did my daughter Louise bring up the issue of my late husbands and my Wills or Power of Attorney. In approximately January of 2008 I asked Louise if she would be my Power of Attorney and she agreed to this. I subsequently retracted that request and Louise accepted my decision graciously. I consulted with James Houston regarding this issue as at that time he was my Power of Attorney. After going back and forth two or three times and James debunking this idea, I took it upon myself to seek out a lawyer and have my daughters named my Power of Attorney. When I told James he appeared to be very upset and disapproving.

The change to the Power of Attorney set in motion the attempt on the part of all four Houston children to talk their father into changing our Power of Attorney and Wills. (See letter from lawyer David Humphries Dec. 5, 2008).

At no time did my husband and I discuss or agree to changing our wishes as we were satisfied that what we had done was right and proper for both of us and our adult children (aged in their 50’s and 60’s).

During the last year of my husband’s life (died May 8, 2009) we were confronted by James and other members of his family to change our Power of Attorney and Wills. We felt it unnecessary and inappropriate. We had every intention of honoring the terms of the Wills. It was only after my husband’s death, and three days later, when I found out that James had severed the joint tenancy on the property (206-2277 Oak Bay Ave) without my knowledge and consent. It was only at this time that I reconsidered the carefully laid out plans that were made by my husband and myself and felt then compelled to sever the rights of my step-children to any portion of the estate.

My daughter during this time had been of great assistance to my late husband and myself. At no time did my husband express any distrust in Louise, to the contrary. Louise has never exercised any undue influence on myself or my husband at any time. She has been supportive by offering assistance to do what we could no longer do for ourselves. However, at no time did she make any decisions on my behalf – that was done ONLY by myself and my husband. I continue to exercise my autonomy to this day by making all final decisions.

It has been said by the Houston children that my daughter stole PIN numbers. She has never been in possession of our PIN numbers and never has she taken, transacted or initiated any financial issues for us. We have a normal, healthy loving mother and daughter relationship.

I am shock and dismayed at what James and his siblings have said about my daughter and they are incorrect.

The actions of the Houston Children of course, affected my status of sole ownership of my condominium. This obviously affects my ability to pay for my maintenance in the future. My two children Tony and Louse Fowler do not have the means to financially support me.

I write this letter on my own volition and am in no way influenced.

*NOTE: this letter was witnessed and notarized by Michael Hutchison on February 14, 2010. 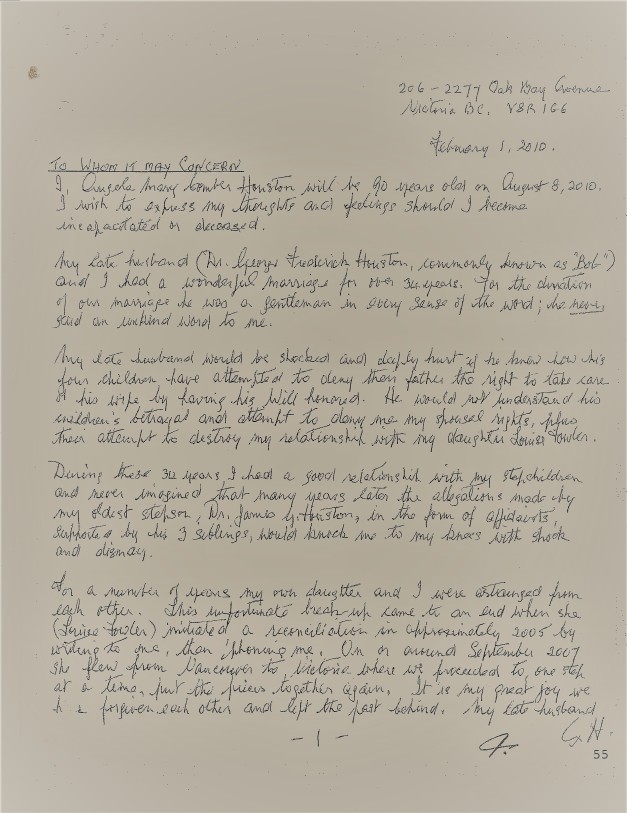 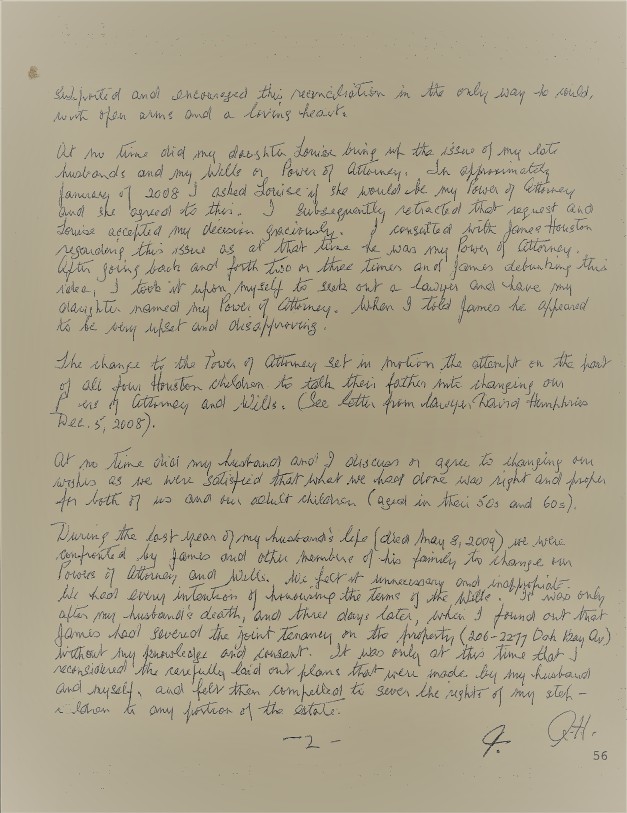 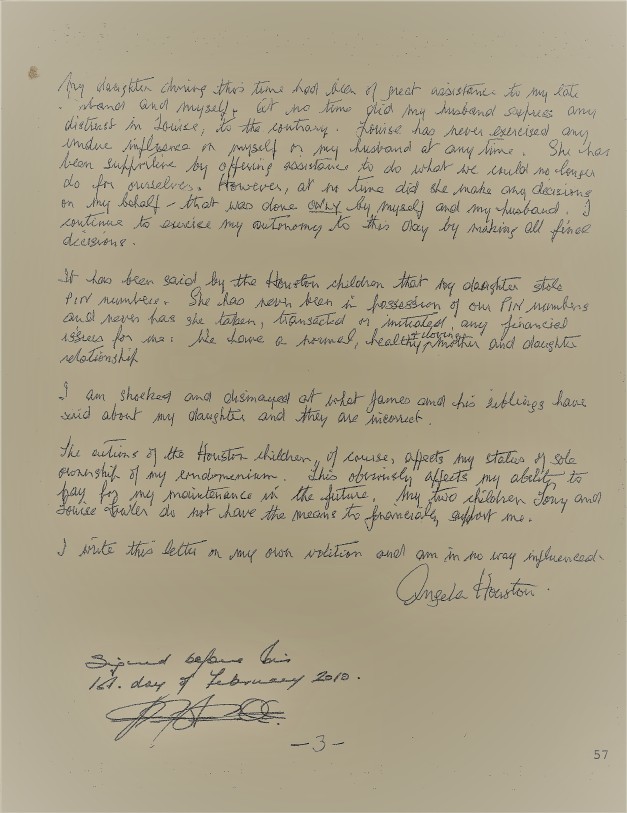