LIVING WITH DYSLEXIA – THE HIDDEN DISABILITY

I didn’t learn what was the problem until I was about 40 years old. 40 years of not knowing, 40 years of thinking something was wrong with me and I was stupid. 40 years of people accusing me of being lazy, not trying, being stupid and not understanding why I isolated myself, notwithstanding the Complex PTSD left me alone, confused and very hurt. The terror I have felt during my life, the distress it has put me through. Trying to get work (with a grade 8 education. I left so early because of abuse in the home and my inability to learn) and having to scramble desperately to figure everything out, stuff everyone thought I should know. I didn’t have the words to explain it so I felt such overwhelming embarrassment and humiliation. I was so relieved when I found out what was wrong with me but it was only half the story, the other half was the Complex PTSD which I found out about the same time. The problem was so much damage had been done, so much shaming of me by my family and extended family that couldn’t be undone. Then there was the shaming because I just couldn’t “pull myself up by my boot straps”.  Although my family prefered to gossip and accuse and shame they never asked me what what wrong, never inquired if I was ok, ever.

“Dyslexia, a Greek word meaning “difficulty with words”, refers to learning disabilities, as the persons affected by this disorder cannot cope with standard, common ways of learning. They develop excellent use of visual thinking skills at an early age, they recognize real life objects, but cannot deal with printed symbols such as alphabet letters and words.

Dyslexic people are intuitive, highly intelligent and creative individuals who are visual, multi-dimensional thinkers. But because they think in pictures, they have troubles when it comes to letters, numbers, symbols, and written words.

Spatial/visual thinking is very much different from the sequential thinking. Sequential thinking is the way a normal person views the world: it is related to auditory thinking, linear through time, involving analysis and progression from simple to complex, deductive reasoning (from the parts to the whole).

On the contrary, visual thinking is a holistic system of merging and intermingling knowledge in space. It involves synthesis, intuition of complex systems, inductive reasoning (from the whole to the constituents, fragments.)

Having a neurological and genetic origin, dyslexia can be explained by the fact that individuals suffering from it process information in a different area of the brain than do non-dyslexic, average people. 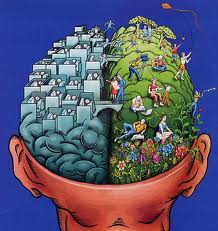